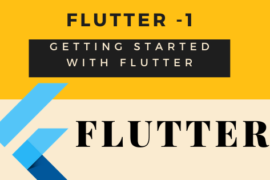 Getting Started with Flutter

Flutter is google’s official open-source framework to create high quality and high-performance mobile applications for both Android and iOS devices by using single programming language “Dart”, which is officially created by Google.

Dart is an object-oriented, client-optimized programming language and also used for desktop, backend, and web applications.

For creating a mobile application by using a flutter framework, you can use macOS, Windows, or Linux. you can use any editor like Visual Studio Code, Android Studio, or IntelliJ IDEA.

The first project in Flutter

After the successful creation of the project, you will see a main.dart file containing demo code. this demo code is a simple counter which counts the number of clicked on fab Icon.

Just run the flutter command with a connected device or emulator you will get the output as.